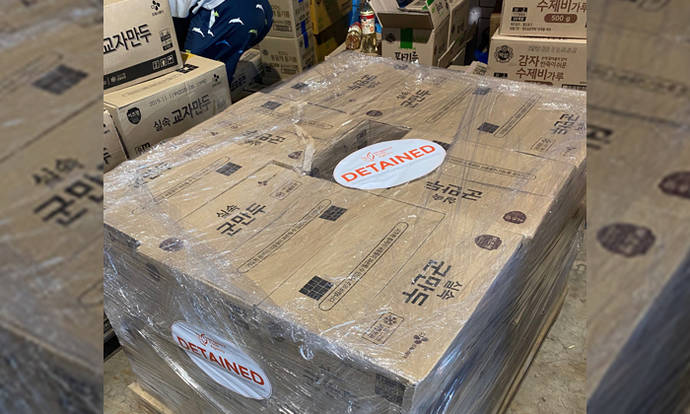 The Managing Director of Koryo Trading Pte Ltd was fined on Wednesday February 23 for failing to exercise due diligence to prevent the illegal operation of an unlicensed cold storage warehouse and the illegal importation of meats and fruits from assorted sea from Korea.

Yoon Duck Chang was fined $12,000, the Food Agency of Singapore said in a press release.

Koryo Trading, a food importer, was previously fined $30,000 in October 2021 for operating an unlicensed cold storage facility and illegally importing an assortment of meats and seafood from Korea.

SFA officers had found around 4,656kg of meat and seafood products such as meatballs, frozen beef and processed squid in an unlicensed cold store during an inspection in February 2020.

Further investigations revealed that the company had illegally imported the meat products from Korea.

Investigations also revealed that Koryo Trading had, on another occasion, illegally imported approximately 72 kg of puffer fish and puffer fish products from Korea.

The illegal shipments were seized.

In Singapore, food imports must meet SFA requirements. Food can only be imported by licensed importers, and each shipment must be declared and accompanied by a valid import permit.

“Meat and its products can only be imported from accredited sources in approved countries that meet our food safety standards and requirements,” the SFA said.

Offenders who illegally import meat and seafood face a maximum fine of $50,000 and/or up to two years in prison.

Under the Sale of Food Act and the Wholesome Meat and Fish Act, cold storage facilities for meat and seafood products can only be operated with a valid license. These approved premises are also regularly inspected by the SFA.

Violators who store meat and seafood products in unlicensed premises can be fined up to $10,000 and/or jailed for up to 12 months.

US stock markets in correction territory, TSX down on worrying signs from Ukraine