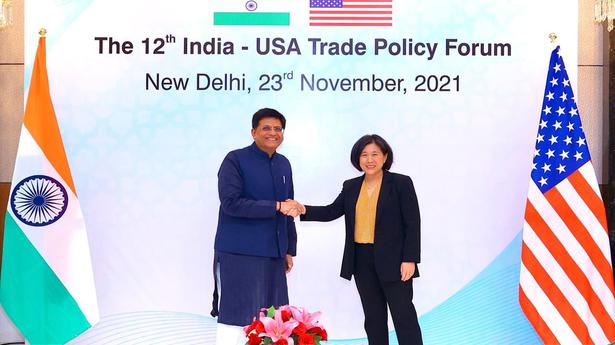 India, United States Agree To Solve Trade Problems And Take Economic Relations To “The Next Level”

Indian grapes, pomegranates, American cherries and pork could be the first winners as the Indo-American business forum comes to life after a four-year gap.

The United States and India pledged to integrate their economies across sectors to harness the untapped potential of bilateral ties at the Trade Policy Forum which met on Tuesday after a four-year hiatus.

Co-chaired by Minister of Trade and Industry, Textiles, Consumer and Food and Public Distribution Piyush Goyal and US Trade Representative Ambassador Katherine Tai, the Forum decided to bring economic relations between the two countries to the “highest level” and held an exchange of views. on “potential targeted tariff reductions”.

The two sides agreed to activate the Trade Policy Forum (TPF) working groups on agriculture, non-agricultural goods, services, investment and intellectual property to meet frequently and address issues of mutual interest in a mutually beneficial manner. The idea is to deliver tangible benefits to farmers and businesses in both countries by solving outstanding market access issues.

Specifically, the Forum decided to enter into an agreement to facilitate access to the US market for mangoes, grapes and pomegranates, pomegranate arils from India, and reciprocate with similar access to the Indian market to cherries, pork / pork products and alfalfa hay for animal feed. the United States.

Discussions will also take place on improving market access for products such as distillers’ grains with solubles from the United States and addressing market access issues for water buffalo meat and wild shrimp caught in India.

The Indian side called on the US to reinstate the benefits of the Generalized System of Preferences (GSP) and said it would help industries on both sides to effectively integrate their supply chains. The United States noted it “for proper consideration”, according to an official statement.

The Forum also agreed on the importance of negotiating a social security aggregation agreement for the benefit of workers on both sides, and pursuing other commitments to reach such an agreement.

The aggregation deal, pursued for more than a decade, would allow workers in both countries to move their retirement savings, the lack of which particularly affects Indian computer scientists in the United States who are losing billions of dollars in statutory U.S. payroll taxes. ‘they cannot repatriate. residence.

Ahead of the WTO ministerial meeting next week, India and the United States also discussed collaboration and constructive engagement in various multilateral trade bodies, including the WTO and the G20. , to achieve a common vision of a transparent and rules-based global trading system between market economies and democracies. The Forum also decided to find mutually agreed solutions on the outstanding WTO disputes between the two countries.

Ms. Tai and Mr. Goyal called on TPF working groups to develop action plans to achieve substantial progress by March 2022, which would include identifying specific trade outcomes that could be finalized for an intersessional meeting. of the TPF to be held by mid-2022. .

The United States has indicated that it is keen to supply ethanol to India to meet its goal of blending 20% ​​ethanol with gasoline by 2025, while the two sides agreed to partner with allies to develop a secure pharmaceutical manufacturing base and reduce the risks of global supply chains in these critical sectors. like health.

On the services front, the Forum discussed ways in which legal, nursing and accounting services can facilitate the growth of trade and investment, and sought to work together on electronic payment services and the digital economy.

While India hailed the recent US move to allow fully vaccinated Indians to travel there, the two sides decided to continue to engage on visa issues to facilitate the movement of professionals, workers qualified, experts and scientific personnel.