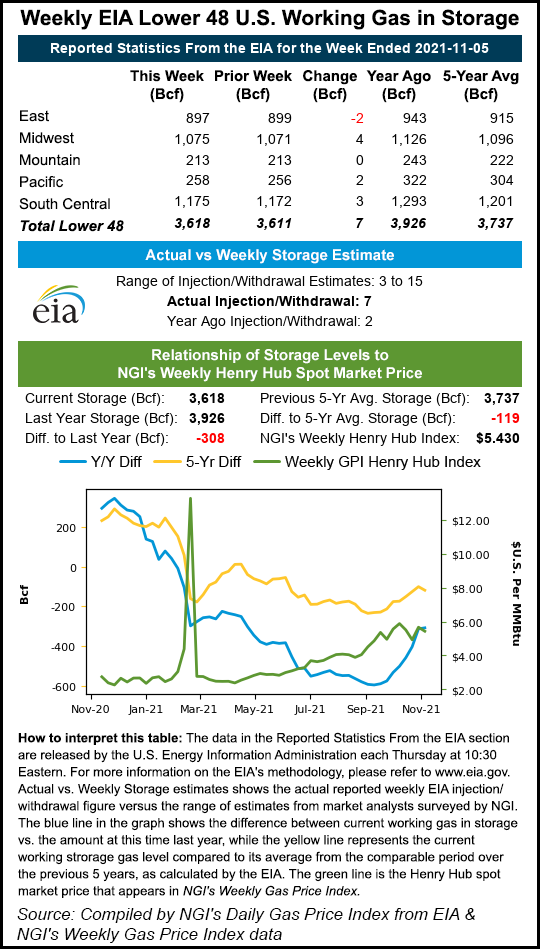 The EIA’s weekly inventory report was released at noon ET on Wednesday, a day earlier than normal due to Veterans Day.

Nymex futures prices fell throughout the morning as weather forecasts continued to lack widespread cold across the country. In the minutes leading up to the EIA report, the December Nymex contract was trading about 6.0 cents lower per day at around $ 4.92 / MMBtu. As the print passed through the trading desks, the speedy month slipped to around $ 4.90 and at 12:30 p.m. was at $ 4.816, down 16.3 cents from Tuesday’s close.

[Business Process Optimization: Are you an NGI data subscriber? You can sync your data automatically and easily. Find out how.]

For the period of the previous year, EIA recorded an injection of 2 Bcf, and the five-year average is a build of 25 Bcf.

Broken down by region, the Midwest added 4 billion cubic feet in storage, according to the EIA. South Central recorded a net injection of 3 Bcf which included a 4 Bcf increase in salt stocks and a 2 Bcf removal of non-salts. The East also pulled 2 Bcf, while the Pacific climbed 2 Bcf.

Looking ahead to the next EIA report, Enelyst participants have favored an additional injection into stocks before withdrawals become widespread. The first estimates reported to The Desk varied between an injection of 13 Bcf and 30 Bcf.

Given the current week’s higher wind production and production gains, the supply / demand balance reflected in the EIA figure is “probably not representative of the actual state of the market”, according to Bespoke Weather Services. The company said prices continued to fall after the report.

“Without a cold, there are still downside risks in the coming weeks,” Bespoke said.