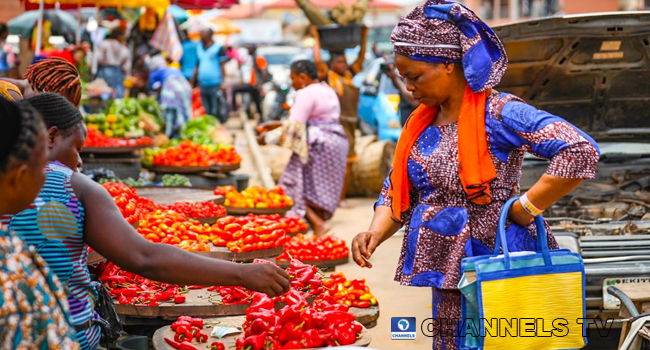 The Nigeria Petroleum and Natural Gas Senior Executives Association (PENGASSAN) has sounded the alarm about the rising cost of food and cooking gas in the country.

In a statement signed jointly by its president, Festus Osifo, and its general secretary, Lumumba Okugbawa, the union lamented that the nation is degenerating into a land of hunger.

The purchasing power of the population, he said, has seriously deteriorated as food prices in the market have continued to rise over the past three years.

He blamed the situation on the devaluation of the naira against major currencies, displacement of farmers by bandits and terrorists, and inconsistent government policies, among others.

According to PENGASSAN, farmers in Benue, Plateau, Katsina, Nasarawa and Taraba states cannot easily access their farmlands due to security threats.

Regarding the cost of liquefied natural gas (LPG), commonly known as cooking gas, he lamented that the price of filling a 12.5 kg cylinder had increased by almost 100%.

The union believes poor families are going through painful experiences in their struggle to cope, even though the price of kerosene has since risen despite the unavailability of the product

He also called on the government to encourage its workers rather than making the COVID-19 vaccine mandatory, adding that deregulation of the downstream oil sector should be based on domestic refining and not dependent on imports.

PENGASSAN ON THE STATE OF THE NATION

The Nigerian Petroleum and Natural Gas Senior Executives Association (PENGASSAN) would like to bring to the attention of the President of the Federal Republic of Nigeria, the Speaker of the Senate, the Speaker of the House of Representatives and other key stakeholders on some of the burning issues of our national politics and the existential need for government to put the best interests of the citizens first in all of its dealings.

We strongly advocate that the government develop a robust mechanism to monitor how its macroeconomic policies, whether fiscal or monetary, affect the disposable income of individuals and households in the country.

The Association noted, and sadly, that most recent government macroeconomic policies have further exacerbated the economic hardships faced by our members and Nigerians in general.

If these poverty-induced policies are not urgently brought under control and corrective measures are not put in place, we can assure you that the little hope that citizens have in the country will quickly erode and this could degenerate the already difficult security situation and seriously affect the level of governance.

Some of the dominant issues that affect the general population and require urgent attention are:

PENGASSAN observed with dismay the recent directive accompanied by threats from the Presidential Steering Committee (PSC) that civil servants, in particular federal government employees, would be required from December 1, 2021 to present proof of vaccination or chain reaction. by polymerase negative (PCR) tests, carried out within 72 hours to access their offices in all locations in Nigeria and in missions.

We regard this directive and these threats as improper, draconian and contrary to the Constitution of the Federal Republic of Nigeria, which the government has committed to always respect. The Association has previously urged workforce suppliers to educate and advocate with its employees on the benefits of taking COVID-19 vaccines and not threatening the workforce.

We want to demand that anti-democratic and anti-mass directives, which undermine citizens’ rights, be stopped and withdrawn with immediate effect.

The nation is rapidly degenerating into a hungry land as if famine is befalling our beloved nation. The purchasing power of citizens’ already impoverished disposable income has escalated dramatically as the cost of food in the market has increased astronomically over the past three years.

While the cost of food increases astronomically, wages are stagnant at best and in some cases unilaterally and drastically reduced. This could be due to several factors which are not limited to the gross devaluation of the Naira against major currencies, displacement of farmers by bandits and terrorists, inconsistent government policies, etc.

To further exacerbate the looming dangers caused by food insecurity, farmers in states such as Benue, Plateau, Katsina, Nasarawa and Taraba cannot easily access their farmlands due to a myriad of security concerns caused by incompetence and lack of patriotism.

There is a need to secure farmers and their farmland, as the overall food production of local farmers is the bedrock on which our food security systems are built.

The Association wishes to draw more attention to the Government on the hyperinflation which has affected Liquefied Natural Gas (LPG), commonly known as cooking gas. It is disheartening that the price of filling a 12.5 kg cylinder of liquefied petroleum gas (cooking gas) has increased by almost 100% in the past year.

This is a unique product that is used by several households in the country. Currently, the cost of cooking gas has continued to climb steadily, from an average of 4,500 naira in early 2021 to the current price of between 8,750 and 10,000 naira for the popular 12.5 kg cylinder.

We fear that most middle to upper class households, especially in urban areas, will feel the effects. Poorer families go through painful experiences trying to get by, especially since the price of kerosene has long since skyrocketed and is scarce in many places. Although Nigeria sits on one of the largest gas reserves in the world, we still rely heavily on imported gas. Up to 70 percent of the gas we consume in the country is imported.

Some of the reasons for this dizzying increase are the devaluation of the Naira against major currencies and the introduction of a 7.5% value added tax on imported gas, an increase in the international price of gas, etc. We hereby call on the President to immediately abolish VAT on the import of gas, prevent a further slide of the Naira, channel some of the exported gas for domestic use, and provide some form of verifiable stopgap for consumers. lower class citizens.

The history of deregulating the downstream oil sector through the phase-out or total elimination of subsidies has spawned intense debates among PENGASSAN, successive governments, stakeholders and experts in the oil and gas sector, each claiming that it will guarantee the long-term stability of the supply and the prices of the products. And that this will lead to a breakthrough and a well-developed economic transformation of the country.

PENGASSAN as an Association and a major player in the industry has no problems with all the benefits, they claim that deregulations will usher in the economy because we understand the inner workings of the industry and therefore are in pole position on the questions which border it. While maintaining our support for the total deregulation of the sector, we however reiterate that we will only support a deregulation exercise based on domestic refining and not dependent on imports.

Therefore, efforts should be made to accelerate the pace of the current rehabilitation of the refinery and support the continued strengthening of the Naira. In conclusion, we wish to urge the government at all levels to come together quickly and find urgent short and long term solutions to the myriad of problems plaguing the Nation in order to reduce the hardships faced by citizens.

A point in time is worth nine.

For: ASSOCIATION OF SENIOR OIL AND NATURAL GAS STAFF OF NIGERIA (PENGASSAN).